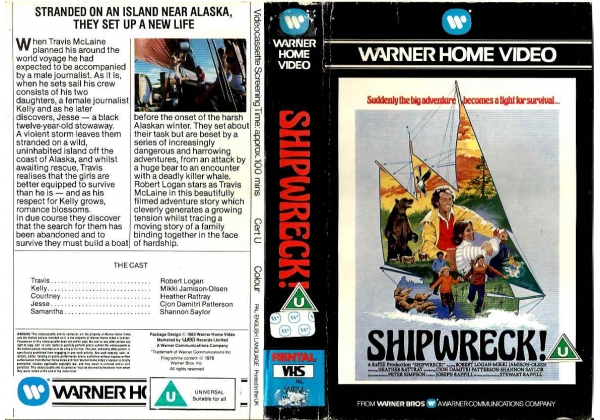 Sleeve Sypnosis:
STRANDED ON AN ISLAND NEAR ALASKA, THEY SET UP A NEW LIFE

When Travis McLaine planned his around the world voyage he had expected to be accompanied by a male journalist. As it is, when he sets sail his crew consists of his two daughters, a female journalist Kelly and as he later discovers, Jesse - a black 12yr old stowaway. A violent storm leaves them stranded on a wild, uninhabited island off the coast of Alaska, and whilst awaiting rescue, Travis realises that the girls are better equipped to survive than he is - and as his respect for Kelly grows, romance blossoms.

In due course they discover that the search for them has been abandoned and to survive they must build a boat before the onset of the harsh Alaskan winter. They set about their task but are beset by a series of increasingly dangerous and harrowing adventures, from an attack by a huge bear to an encounter with a deadly killer whale.

Robert Logan is Travis McLaine in this beautifully filmed adventure story which cleverly generates a growing tension whilst tracing a moving story of a family binding together in the face of hardship.

Or find "Shipwreck!" on VHS and DVD / BluRay at Amazon.