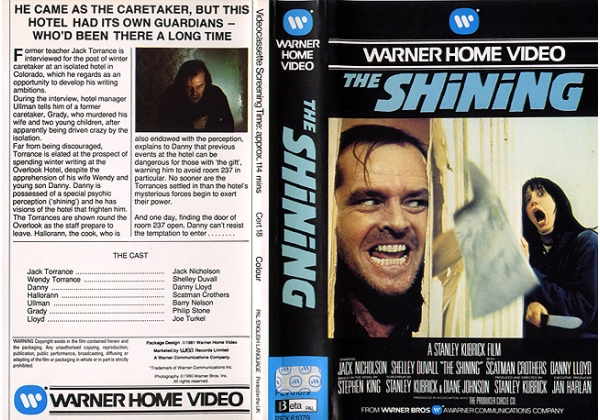 Sleeve Sypnosis:
Former teacher Jack Torrance is interviewed for the post of winter caretaker at an isolated hotel in Colorado, which he regards as an opportunity to develop his writing ambitions. During the interview, hotel manager Ullman tells him of a former caretaker, Grady, who murdered his wife and two young children, after apparently being driven crazy by the isolation. Far from being discouraged, Torrance is elated at the prospect of spending winter writing at the Overlook Hotel, despite the apprehension of his wife Wendy and young son Danny. Danny is possessed of a special psychic perception ('shining') and he has visions of the hotel that frighten him. The Torrances are shown round the Overlook as the staff prepare to leave. Halloran, the cook, also endowed with the perception, explains to Danny that previous events at the hotel can be dangerous for those with 'the gift', warning him to avoid room 237 in particular. No sooner are the Torrances settled in than the hotel's mysterious forces begin to exert their power. And one day, finding the door of room 237 open, Danny can't resist the temptation to enter........