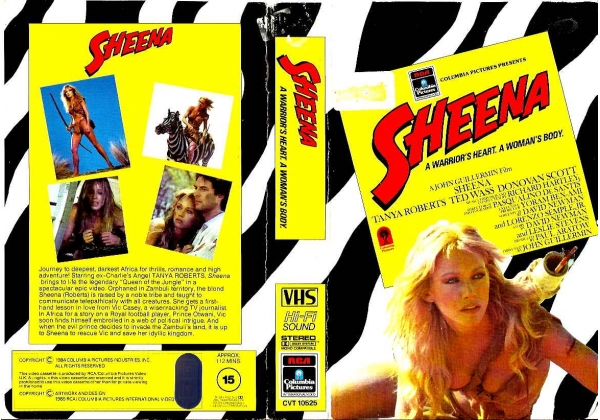 Sleeve Sypnosis:
Journey to deepest, darkest Africa for thrills, romance and high adventure! Starring ex-Charlie's Angel TANYA ROBERTS, Sheena brings to life the legendary "Queen of the Jungle" in a spectacular epic video. Orphaned in Zambuli territory, the blond Sheena (Roberts) is raised by a nobile tribe and taught to communicate telepathically with all creatures. She gets a first-hand lesson in love from Vic Casey, a wisecracking TV journalist.

In Africa for a story on a Royal football player, Prince Otwani, Vic soon finds himself embroiled in a web of political intrigue. And whe the evil prince decides to invade Zambuli's land, it is up to Sheena to rescue Vic and save her idyllic kingdom.

Or find "Sheena" on VHS and DVD / BluRay at Amazon.