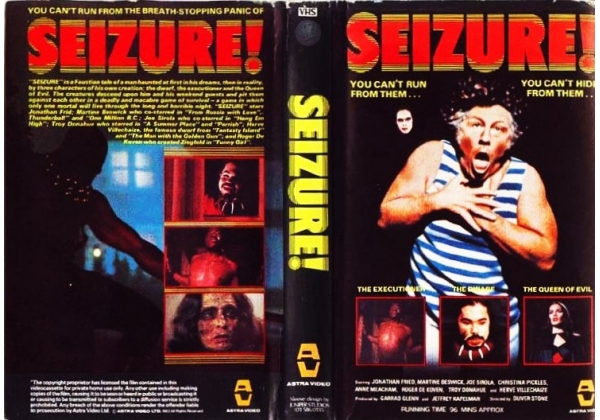 Sleeve Sypnosis:
YOU CAN'T RUN FROM THEM... YOU CAN'T HIDE FROM THEM...
"SEIZURE" is a Faustian tale of a man haunted at first in his dreams, then in reality, by three characters of his own creation; the dwarf, the executioner and the Queen of Evil. The creatures descend upon him and his weekend guests and pit them against each other in a deadly and macabre game of survival - a game in only one mortal will live through the long and horrible night. "SEIZURE" stars Jonathan Frid; Martine Beswick who co-starred in "From Russia with Love", Thunderball" and "One Million B.C.; Joe Sirola who co-starred in "Hang Em High"; Troy Donahue who starred in "A Summer Place" and "Parrish"; Herve Villechaize, the famous dwarf from "Fantasy Island" and "The Man with the Golden Gun"; and Roger De Koven who created Ziegfeld in "Funny Girl".

Or find "Seizure!" on VHS and DVD / BluRay at Amazon.