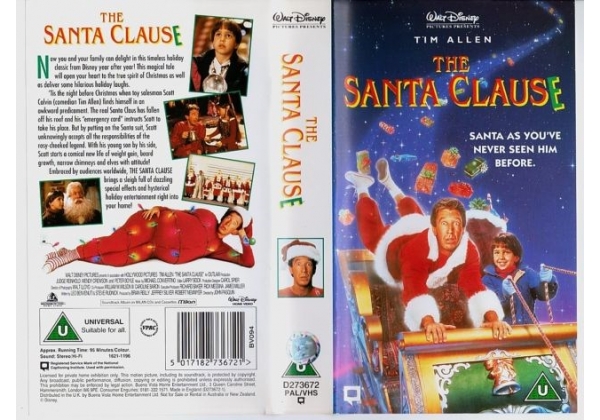 Sleeve Sypnosis:
Now you and your family can delight in this timeless holiday classic from Disney year after year! This magical tale will open your heart to the true spirit of Christmas as well as deliver some hilarious holiday laughs.
'Tis the night before Christmas when toy salesman Scott Calvin (comedian Tim Allen) finds himself in an awkward predicament. The real Santa Claus has fallen off his roof and his "emergency card" instructs Scott to take his place. But by putting on the Santa suit, Scott unknowingly accepts all the responsibilities of the rosy-cheeked legend. With his young son by his side, Scott starts a new comical life of weight gain, beard growth, narrow chimneys and elves with attitude!
Embraced by audiences worldwide, The Santa Clause brings a sleigh full of dazzling special effects and hysterical holiday entertainment right into your home!

Or find "Santa Clause, The" on VHS and DVD / BluRay at Amazon.