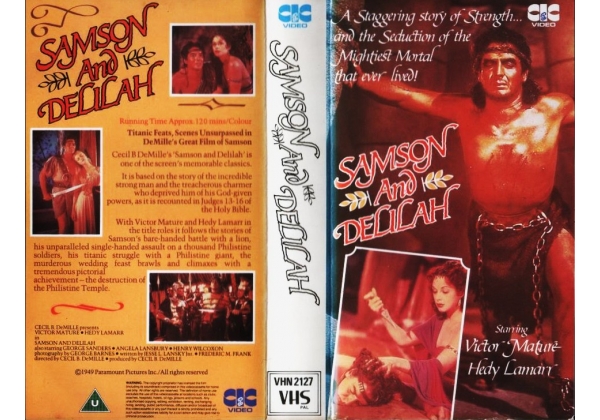 Sleeve Sypnosis:
A STAGGERING STORY OF STRENGTH...AND SEDUCTION OF THE MIGHTIEST MORTAL THAT EVER LIVED!

Titanic Feats, Scenes Unsurpassed in DeMille's Great Film of Samson. Cecil B DeMille's 'Samson and Delilah' is one of the screen's memorable classics. It is based on the story of the incredible strong man and the treacherous charmer who deprived him of his God-given powers, as it is recounted in Judges 13-16 of the Holy Bible. With Victor Mature and Heady Lamarr in the title roles it follows the stories of Samson's bare-handed battle with a lion, his unparallelled single-handed assault on a thousand Philistine soldiers, his titanic struggle with a Philistine giant, the murderous wedding feast brawls and climaxes with a tremendous pictorial achievement - the destruction of the Philistine Temple.