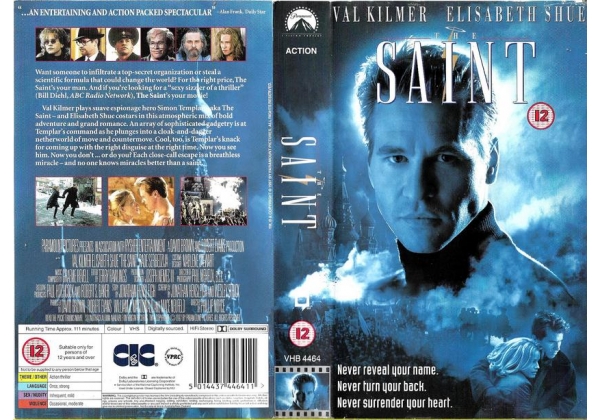 Never reveal your name.
Never turn your back.
Never surrender your heart.

Want someone to infiltrate a top-secret organization or steal a scientific formula that could change the world? For the right price, The Saint's your man. And if you're looking for a "sexy sizzler of a thriller" (Bill Diehl, ABC Radio Network), The Saint's your movie!

Val Kilmer plays suave espionage hero Simon Templar - aka The Saint - and Elizabeth Shue costars in this atmospheric mix of bold adventure and grand romance. An array of sophisticated gadgetry is at Templar's command as he plunges into cloak-and-dagger netherworld of move and countermove. Cool, too, is Templar's knack for coming up with the right disguise at the right time. Now you see him. Now you don't...or do you? Each close-call escape is a breathless miracle-and no one knows miracles better than a saint.

Or find "Saint, The" on VHS and DVD / BluRay at Amazon.