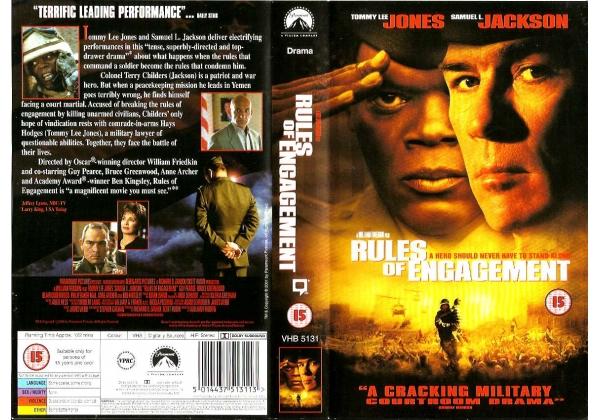 Sleeve Sypnosis:
A HERO SHOULD NEVER HAVE TO STAND ALONE

Tommy Lee Jones and Samuel L. Jackson deliver electrifying performances in this "tense, superbly-directed and top-drawer drama"* about what happens when the rules that command a soldier becomes the rules that condemn him. Colonel Terry Childers (Jackson) is a patriot and war hero. But when a peacekeeping mission he leads in Yemen goes terribly wrong, he finds himself facing a court martial. Accused of breaking the rules of engagement by killing unarmed civilians, Childer's only hope of vindication rests with comrade-in-arms Hays Hodges (Tommy Lee Jones), a military lawyer of questionable abilities. Together, they face the battle of their lives.

Or find "Rules of Engagement" on VHS and DVD / BluRay at Amazon.