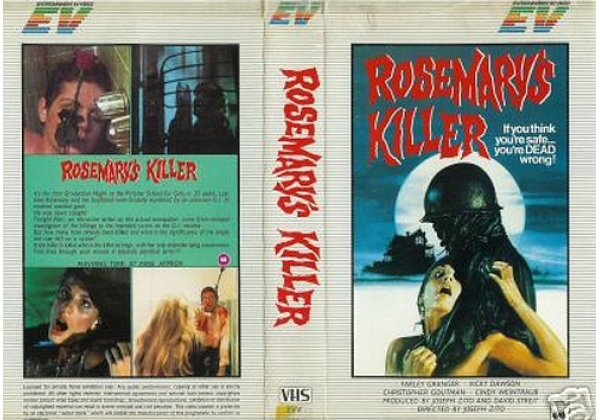 Sleeve Sypnosis:
If you think you're safe... you're DEAD wrong!

It's the first Graduation Night at the Pritcher School for Girls in 35 years. Last time Rosemary and her boyfriend were brutally murdered by an unknown G.I. in masked combat garb... Tonight, Pam, an attractive writer on the school newspaper, turns from intrepid investigator of the killings to the intended victim of as the G.I. returns... But how many have already been killed and what is the significance of the single red rose left on a victim? If the killer is killed who is the killer at large, with her only defender lying unconscious Pam lives through each minute in pityfully petrified terror!!!

Or find "Rosemary's Killer" on VHS and DVD / BluRay at Amazon.