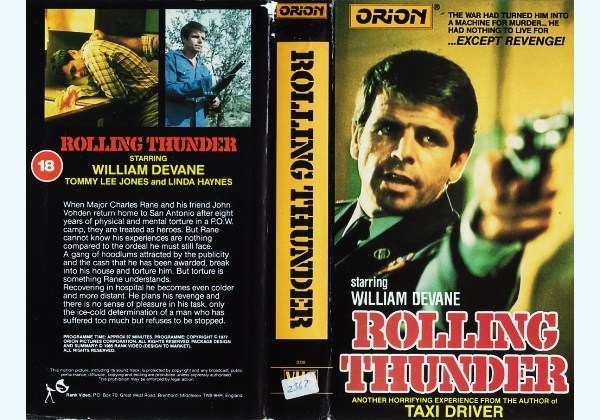 Sleeve Sypnosis:
When Major Charles Rane and his friend John Vohden return home to San Antonio after eight years of physical and mental torture in a P.O.W. camp, they are treated as heroes. But Rane cannot know his experiences are nothing compared to the ordeal he must still face. A gang of hoodlums attracted by the publicity and the cash that he has been awarded, break into his house and torture him. But torture is something Rane understands. Recovering in hospital he becomes even colder and more distant. He plans his revenge and there is no sense of pleasure in his task, only the ice-cold determination of a man who has suffered too much but refuses to be stopped.

Or find "Rolling Thunder" on VHS and DVD / BluRay at Amazon.