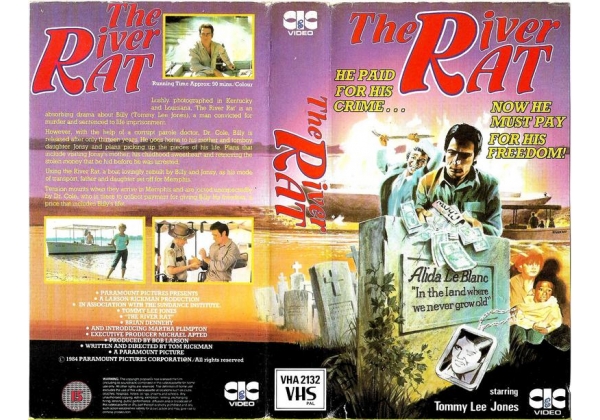 Sleeve Sypnosis:
HE PAID FOR HIS CRIME... NOW HE MUST PAY FOR HIS FREEDOM!

Lushly photographed in Kentucky and Louisiana, 'The River Rat' is an absorbing drama about Billy (Tommy Lee Jones), a man convicted for murder and sentenced to life imprisonment. However, with the help of a corrupt parole doctor, Dr. Cole, Billy is released after only thirteen years. He goes home to his mother and tomboy daughter Jonsy and plans picking up the pieces of his life. Plans that include visiting Jonsy's mother, his childhood sweetheart and retrieving the stolen money that he hid before he was arrested. Using the River Rat, a boat lovingly rebuilt by Billy and Jonsy, as his mode of transport, father and daughter set off for Memphis. Tension mounts when they arrive in Memphis and are joined unexpectedly by Dr. Cole, who is there to collect payment for giving Billy his freedom, a price that includes Billy's life!

Or find "River Rat, The" on VHS and DVD / BluRay at Amazon.