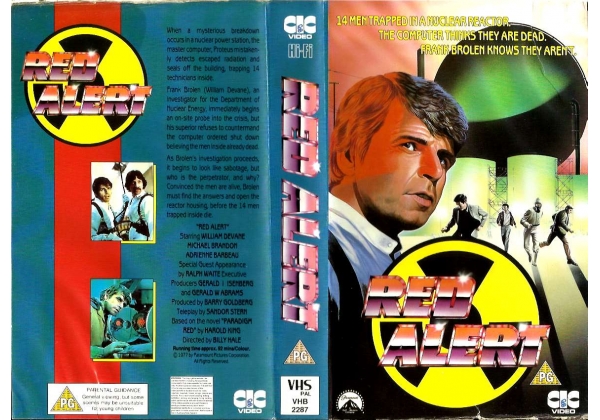 Sleeve Sypnosis:
14 men trapped in a nuclear reactor.
The computer thinks they are dead.
Frank Brolen knows they aren't.

When a mysterious breakdown occurs in a nuclear power station, the master computer, Proteus mistakenly detects escaped radiation and seals off the building, trapping 14 technicians inside.

Frank Brolen (William Devane), an investigator for the Department for Nuclear Energy, immediately begins an on-site probe into the crisis, but his superior refuses to countermand the computer ordered shut down believing the men inside already dead.

As Brolen's investigation proceeds, it begins to look like sabotage, but who is the perpetrator, and why? Convinced the men are alive, Brolen must find the answers and open the recator housing, before the 14 men trapped inside die.

Or find "Red Alert" on VHS and DVD / BluRay at Amazon.