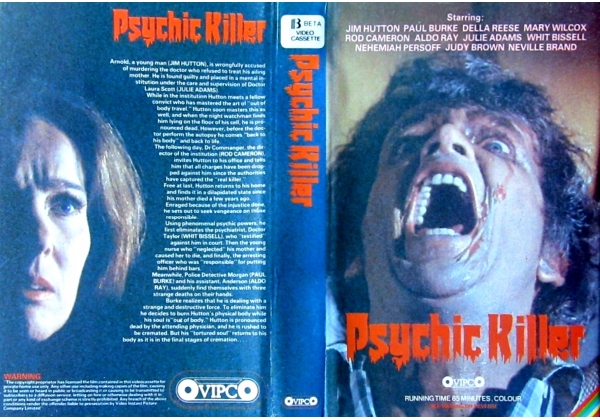 Sleeve Sypnosis:
Arnold, a young man (JIM HUTTON), is wrongfully accused of murdering the doctor who refused to treat his ailing mother. he is found guilty and is placed in a mental institution under the care and supervision of Doctor Laura Scott (JULIE ADAMS). While in the institution Hutton meets a fellow convict who has mastered the art of "out of body travel". Hutton soon masters this as well, and when the night watchmen finds him lying on the floor of his cell, he is pronounced dead. However, before the doctor can perform the autopsy he comes "back to life". The following day, Dr Commanger, the director of the institution (ROD CAMERON) invites Hutton to his office and tells him that all the charges have been dropped against him since the authorities have captured the "real killer". Free at last, Hutton returns to his home and finds it in a dilapidated state since his mother died a few years ago. Enraged because of the injustice done, he sets out to seek vengeance on those responsible. Using phenomenal psychic powers, he first eliminates the psychiatrist, Doctor Taylor (WHIT BISSELL), who "testified" against him in court. Then the young nurse who "neglected" his mother and caused her to die, and finally, the arresting officer who was "responsible" for putting him behind bars. Meanwhile, Police Detective Morgan (PAUL BURKE) and his assisstant, Anderson (ALDO RAY), suddenly find themselves with three strange deaths on their hands. Burke realizes that he is dealing with a strange and destructive force. To eliminate him he decides to burn Hutton's physical body while his soul is "out of body". Hutton is pronounced dead by the attending physician, and he is rushed to be cremated. But his "tortured soul" returns to his body as it is in the final stages of cremation...

Or find "Psychic Killer" on VHS and DVD / BluRay at Amazon.