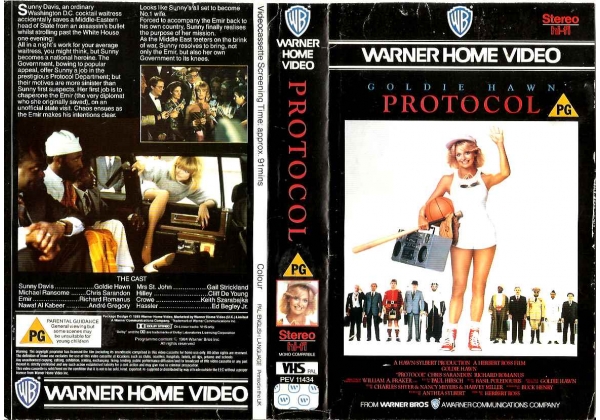 Sleeve Sypnosis:
Sunny Davis, an ordinary Washington D.C. cocktail waitress accidentally saves a Middle-Eastern head of State from an assassin's bullet whilst strolling past the White House one evening .All in a night's work for your average waitress, you might think, but Sunny becomes a national heroine. The Government, bowing to popular appeal, offer Sunny a job in the prestigious Protocol Department; but their motives are more sinister than Sunny first suspects. Her first job is to chaperone the Emir (the very diplomat who she originally saved), on an unofficial state visit. Chaos ensues as the Emir makes his intentions clear. Looks like Sunny's all set to become No.1 wife.

Forced to accompany the Emir back to his own country, Sunny finally realises the purpose of her mission. As the Middle East teeters on the brink of war, Sunny resolves to bring, not only the Emir, but also her own Government to its knees.

Or find "Protocol" on VHS and DVD / BluRay at Amazon.