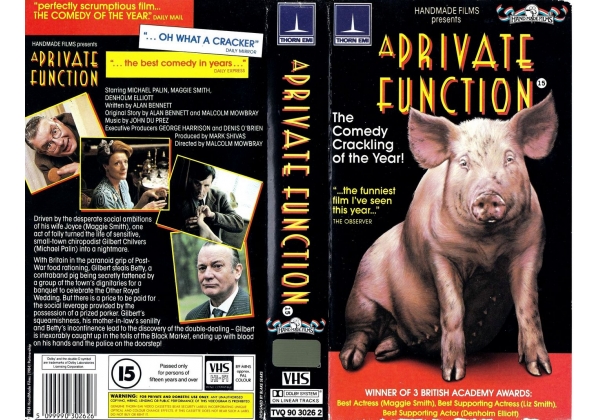 Sleeve Sypnosis:
Driven by the desperate social ambitions of his wife Joyce (Maggie Smith), one act of folly turned the life of sensitive, small-town chiropodist Gilbert Chivers (Michael Palin) into a nightmare. With Britain in the paranoid grip of Post-War food rationing, Gilbert steals Betty, a contraband pig being secretly fattened by a group of the town's dignitaries for a banquet to celebrate the Other Royal Wedding. But there is a price to be paid for the social leverage provided by the possession of a prize porker. Gilbert's squeamishness, his mother-in-law's senility and old Betty's incontinence lead to the discovery of the double dealing - Gilbert is inexorably caught up in the toils of the Black Market, ending up with blood on his hands and the police on the doorstep!

Or find "Private Function, A" on VHS and DVD / BluRay at Amazon.