Prince And The Showgirl, The
Warner Home Video 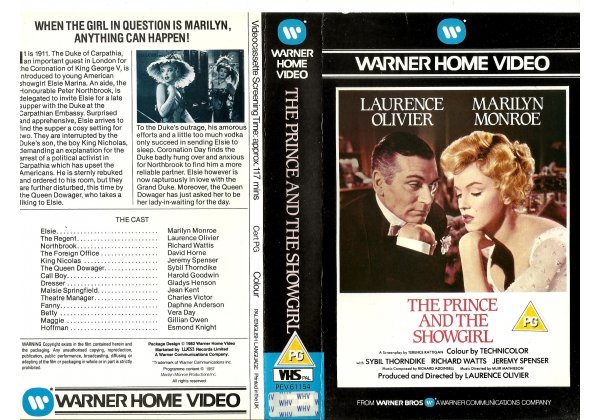 Sleeve Sypnosis:
It is 1911. The Duke of Carpathia, an important guest in London for the Coronation of King George V, is introduced to young American showgirl Elsie Marina. An aide, the Honourable Peter Northbrook, is delegated to invite Elsie for a late supper with the Duke at the Carpathian Embassy. Surprised and apprehensive, Elsie arrives to find the supper a cosy setting for two. They are interrupted by the Duke's son, the boy King Nicholas, demanding an explanation for the arrest of a political activist in Carpathia which has upset the Americans. He is sternly rebuked and ordered to his room, but they are further disturbed, this time by the Queen Dowager who takes a liking to Elsie. To the Duke's outrage, his amorous efforts and a little too much vodka only succeed in sending Elsie to sleep. Coronation Day finds the Duke badly hung over and anxious for Northbrook to find him a more reliable partner. Elsie however is now rapturously in love with the Grand Duke. Moreover, the Queen Dowager has just asked her to be her lady in waiting for the day.

Prince And The Showgirl, The

Or find "Prince And The Showgirl, The" on VHS and DVD / BluRay at Amazon.