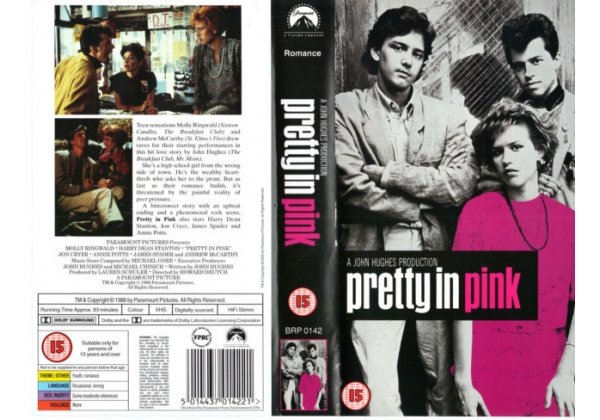 Sleeve Sypnosis:
After '16 Candles' and 'The Breakfast Club', Molly Ringwald is 'Pretty In Pink'.

Andie Walsh (Ringwald) is a bright, sensitive girl with a second hand wardrobe and three men in her life. First there is her father (Harry Dean Stanton). He doesn't work, has been going down hill since his wife left him and has been known to have a drink or three. There is Ducky Dale (marvellousy played by Jon Cryer). He's been a pal of Andie's for eight yrs and now he's got an intense and unrequited crush on her.

And then there's Blane McDonough (Andrew McCarthy), a cute, rich preppie. He and Andie come from opposite sides of the tracks. So when they fall in love the differences between them (he drives a BMW and she's ashamed of where she lives) bring barriers to their romance.

Or find "Pretty in Pink" on VHS and DVD / BluRay at Amazon.