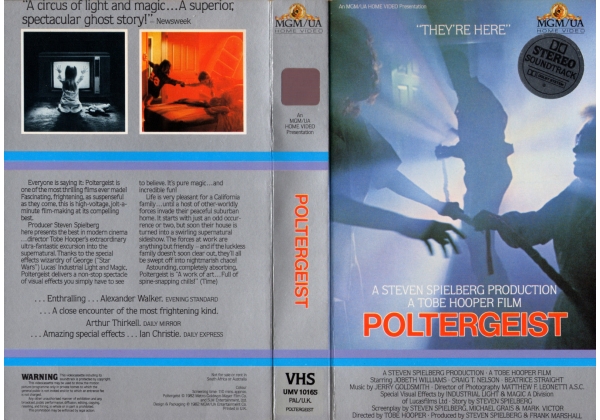 " A circus of light and magic. . .A superior,
spectacular ghost story!"
- NEWSWEEK

Everyone is saying it: Poltergeist is one of the most thrilling films ever made! Fascinating, frightening, as suspenseful as they come, this is high-voltage, jolt-a-minute film-making at it's compelling best. Producer Steven Spielberg here presents the best in modern cinema ...director Tobe Hooper's extraordinary ultra-fantastic excursion into the supernatural. Thanks to the special effects wizardry of George ("Star Wars") Lucas' Industrial Light and Magic, Poltergeist delivers a non-stop spectacle of visual effects you simply have to see to believe. It's pure magic ... and incredible fun! Life is very pleasent for a California family...until a host of other-worldly forces invade their peaceful suburban home. It starts with just an odd occurrence or two, but soon their house is turned into a swirling supernatural sideshow. The forces at work are anything but friendly - and if the luckless family doesn't soon clear out, they'll all be swept off into nightmarish chaos! Astounding, completely absorbing, Poltergeist is "A work of art...Full of spine-snapping chills!" (Time)

. . .A close encounter of the most frightening kind. Arthur Thirkell. DAILY MIRROR

Or find "Poltergeist" on VHS and DVD / BluRay at Amazon.