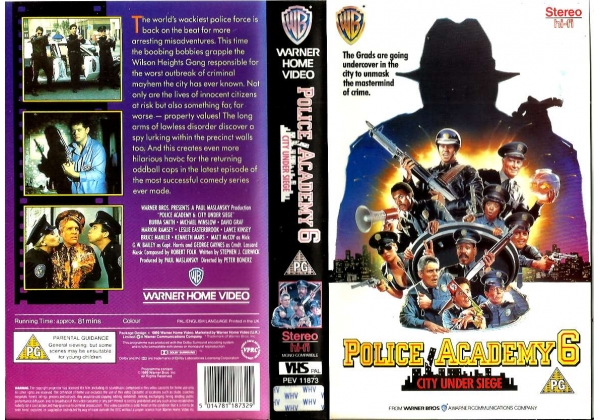 Sleeve Sypnosis:
The Grads are going
undercover in the
city to unmask
the mastermind
of crime.

The world's wackiest police force is back on the beat for one more arresting misadventures. This time the boobing bobbies grapple the Wilson Heights Gang responsible for the worst outbreak of criminal mayhem the city has ever known. Not only are the lives of innocent citizens at risk but also something far, far worse-property values! The long arms of lawless disorder discover a spy lurking within the precinct walls too. And this creates even more hilarious havoc for the returning oddball cops in the lastest episode of the most successful comedy series ever made.

Or find "Police Academy 6: City Under Siege" on VHS and DVD / BluRay at Amazon.