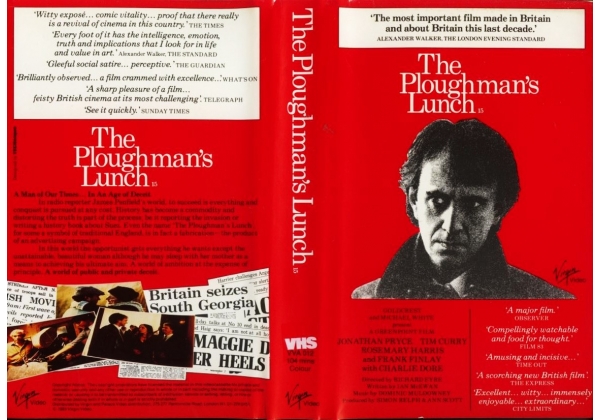 Sleeve Sypnosis:
'Witty expose...comic vitality...proof that there really is a revival of cinema in this country.' THE TIMES

'Every foot of it has the intelligence, emotion, truth and implications that I look for in life and value in art'.
Alexander Walker, THE STANDARD

'A sharp pleasure of a film...feisty British cinema at its most challenging'. TELEGRAPH

A Man of Our Times...In An Age of Deceit.
In radio reporter James Penfield's world, to succeed is everything and conquest is pursued at any cost. History has become a commodity and disorting the truth is part of the process, be it reporting the invasion or writing a history book about Suez. Even the name 'The Ploughman's Lunch', for some a symbol of traditional England, is in fact a fabrication-the product of an advertising campaign.

In this world the opportunist gets everything he wants except the unattainable, beautiful women although he may sleep with her mother as a means of achieving his ultimate aim. A world of ambition at the expense of principle. A world of public and private deceit.

Or find "Ploughman's Lunch, The" on VHS and DVD / BluRay at Amazon.