People Under The Stairs, The
CIC Video 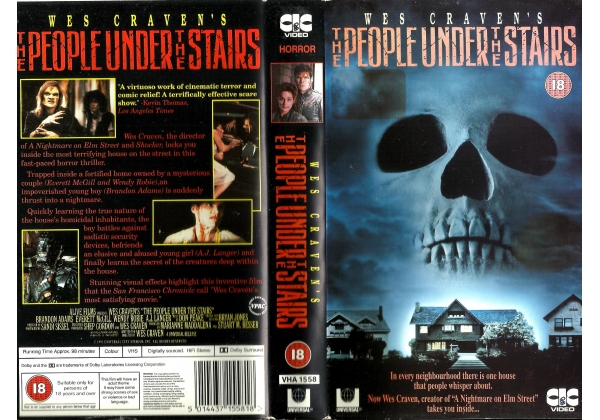 Sleeve Sypnosis:
In every neighbourhood there is one house that people whisper about. Now Wes Craven, creator of "A Nightmare on Elm Street" takes you inside....

Wes Craven, the director of A Nightmare on Elm Street and Shocker, locks you inside the most terrifying house on the street in this fast-paced horror thriller.

Trapped inside a fortified home owned by a mysterious couple (Everett McGill and Wendy Robie), an impoverished young boy (Brandon Adams) is suddenly thrust into a nightmare.

Quickly learning the true nature of the house's homicidal inhabitants, the boy battles against sadistic security, befriends an elusive and abused young girl (A.J. Langer) and finally learns the deep secret of the creatures deep within the house.

People Under The Stairs, The

Or find "People Under The Stairs, The" on VHS and DVD / BluRay at Amazon.