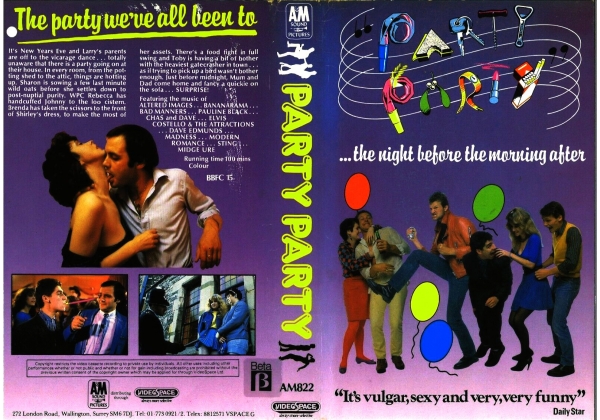 Sleeve Sypnosis:
...the night before the morning after
The party we've all been to. It's New Years Eve and Larry's parents are off to the vicarage dance... totally unaware that there is a party going on at their house. In every room, from the potting shed to the attic, things are hotting up. Sharon is sowing a few last minute wild oats before she settles down to post-nuptial purity. WPC Rebecca has handcuffed Johnny to the loo cistern, Brenda has taken the scissors to the front of Shirley's dress, to make the most of her assets. There's a food fight in full swing and Toby is having a bit of bother with the heaviest gatecrasher in town... as if trying to pick up a bird wasn't bother enough, just before midnight, Mum and Dad come home and fancy a quickie on the sofa... SURPRISE! Featuring the music of ALTERED IMAGES... BANANARAMA... BAD MANNERS... PAULINE BLACK... CHAS and DAVE... ELVIS COSTELLO & THE ATTRACTIONS... DAVE EDMUNDS... MADNESS... MODERN ROMANCE... STING... MIDGE URE

Or find "Party, Party" on VHS and DVD / BluRay at Amazon.