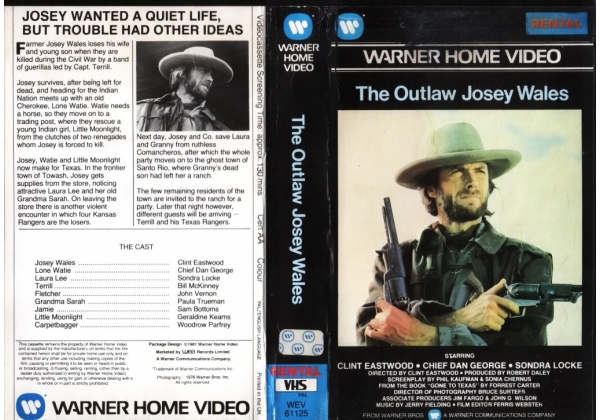 Sleeve Sypnosis:
Farmer Josey Wales loses his wife and young son when they are killed during the Civil war by a band of guerillas led by Capt. Terrill. Josey survives, after being left for dead, and heading for the Indian Nation meets up with an old Cherokee, Lone Watie. Watie needs a horse, so they move on to a trading post, where they rescue a young Indian girl, Little Moonlight, from the clutches of two renegades whom Josey is forced to kill. Josey, Watie and Little Moonlight now make for Texas. In the frontier town of Towash, Josey gets supplies from the store, noticing attractive Laura Lee and her old Grandma Sarah. On leaving the store there is another violent encounter in which four Kansas Rangers are the losers. Next day, Josey and Co. save Laura and Granny from ruthless Comancheros, after which the whole party moves on to the ghost town of Santo Rio, where Granny's dead son had left her a ranch. The few remaining residents of the town are invited to the ranch for a party. Later that night however, different guests will be arriving - Terrill and his Texas Rangers.

Or find "Outlaw Josey Wales, The" on VHS and DVD / BluRay at Amazon.