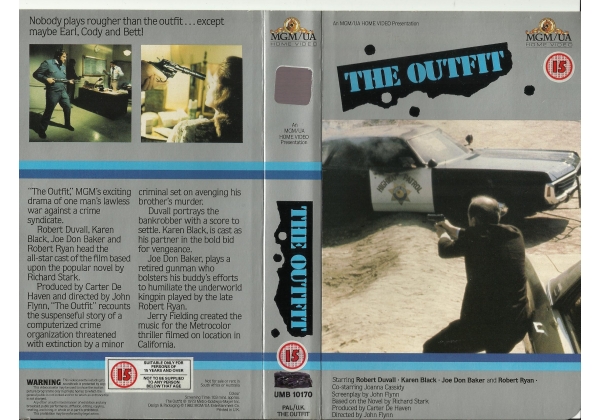 Sleeve Sypnosis:
Nobody plays rougher than the outfit…except maybe Earl, Cody and Bett!
"The Outfit", MGM's exciting drama of one man's lawless war against a crime syndicate.

Robert Duvall, Karen Black, Joe Don Baker and Robert Ryan head the all-star cast of the film based upon the popular novel by Richard Stark. Produced by Carter DeHaven and directed by John Flynn, "The Outfit" recounts the suspenseful story of a computerized crime organization threatened with extinction by a minor criminal set on avenging his brother's murder.
Duvall portrays the bankrobber with a score to settle. Karen Black, is cast has his partner in the bold bid for vengeance. Joe Don Baker, plays a retired gunman who bolsters his buddy's efforts to humiliate the underworld kingpin played by the late Robert Ryan.
Jerry Fielding created the music for the Metrocolor thriller filmed on location in California.

Or find "Outfit, The" on VHS and DVD / BluRay at Amazon.