Out Of Africa
CIC Video 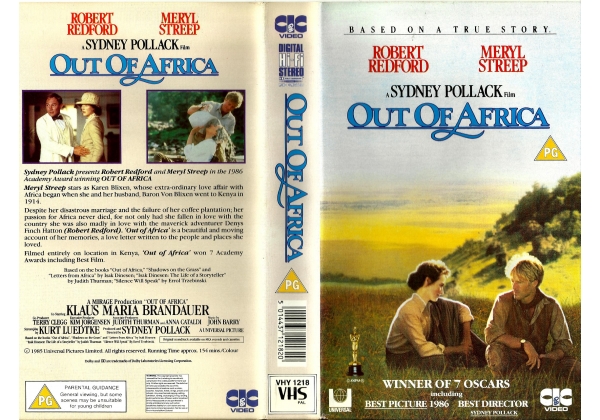 Sleeve Sypnosis:
BASED ON A TRUE STORY

Sydney Pollack presents Robert Redford and Meryl Streep in the 1986 Academy Award winning OUT OF AFRICA.

Meryl Streep stars as Karen Blixen, whose extra-ordinary love affair with Africa began when she and her husband, Baron Von Blixen went to Kenya in 1914.

Despite her disastrous marriage and the failure of her coffee plantation; her passion for Africa never died, for not only had she fallen in love with the country she was also madly in love with the maverick adventurer Denys Finch Hatton (Robert Redford). 'Out of Africa' is a beautiful and moving account of her memories, a love letter written to the people and places she loved.

Filmed entirely on location in Kenya, 'Out of Africa' won 7 Academy Awards including Best Film.

Or find "Out Of Africa" on VHS and DVD / BluRay at Amazon.