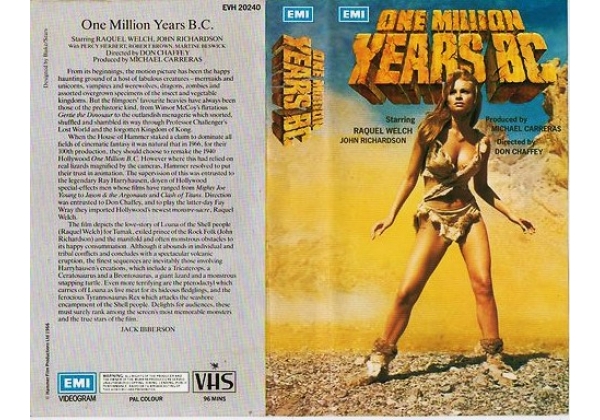 Sleeve Sypnosis:
From its beginnings, the motion picture has been the happy hunting ground of a host of fabulous creatures - mermaids and unicorns, vampires and werewolves, dragons, zombies and assorted overgrown specimens of the insect and vegetable kingdoms. But the filmgoers "favourite" heavies have always been those of the prehistoric kind, from Winsor MCcoy's flirtatious Gertie the Dinosaur to the outlandish menagerie which snorted, shuffled and shambled its way through Professor Challenger's Lost World and the forgotten Kingdom of Kong. When the House of Hammer staked a claim to dominate all fields of cinematic fantasy it was natural that in 1966, for their 100th production, they should choose to remake the 1940 Hollywood One Million B.C. However where this had relied on real lizards magnified by the cameras, Hammer resolved to put their trust in animation. The supervision of this was entrusted to the legendary Ray Harryhausen, doyen of Hollywood special-effects men whose films have ranged from Mighty Joe Young to Jason & the Argonauts and Clash of Titans. Direction was entrusted to Don Chaffey, and to play the latter-day Fay Wray they imported Hollywood's newest monstre-sacre, Raquel Welch. The film depicts the love-story of Loana of the Shell people (Raquel Welch) for Tumak, exiled prince of the Rock Folk (John Richardson) and the manifold and often monstrous obstacles to its happy consumnation. Although it abounds in individual and tribal conflicts and concludes with a spectacular volcanic eruption, the finest sequences are inevitably those involving Harryhausen's creations, a Triceratops, a Ceratosaurus and a Brontosaurus, a giant lizard and a monstrous snapping turtle. Even more terrifying are the pterodactyl which carries of Loana as live meat for its fledglings, and the ferocious Tyrannosaurus Rex which attacks the seashore encampment of the Shell people. Delights for audiences, these must surely rank among the screen's most memorable monsters and the true stars of the film.

Or find "One Million Years B.C." on VHS and DVD / BluRay at Amazon.