One From The Heart
CBS/FOX 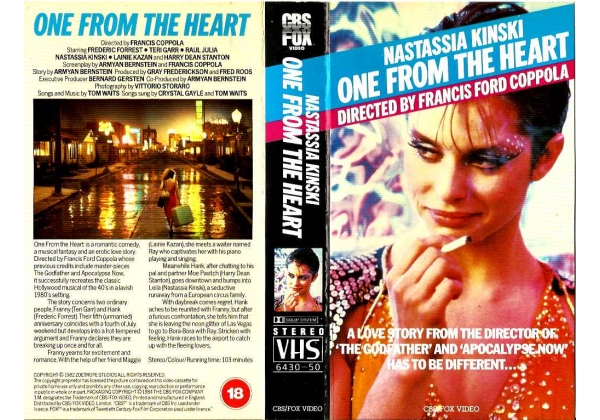 Franny yearns for excitement and romance. With the help of her friend Maggie (Lainine Kazan), she meets a waiter named Ray who captivates her with his pianoplaying and singing. Meanwhile Hank, after chatting to his pal and partner Moe Pavitch (Harry Dean Stanton), goes downtown and bumps into Leila (Nastassia Kinski), a seductive runaway from a European circus family. With daybreak comes regret. Hank aches to be reunited with Franny, but after a furious confrontation, she tells him she is leaving the neon glitter of Las Vegas to go to Bora-Bora with Ray. Stricken with feeling, Hank races to the airport to catch up with the fleeing lovers.

One From The Heart

Or find "One From The Heart" on VHS and DVD / BluRay at Amazon.