One Foot in the Grave: In Luton Airport No One Can Hear You Screa
BBC Video 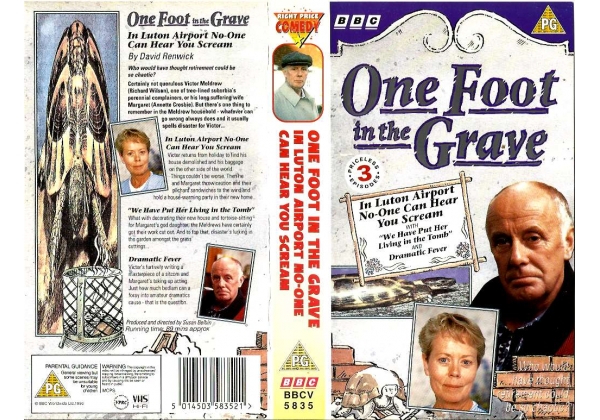 In Luton Airport No-One Can Hear You Scream

Victor returns from holiday to find his house demolished and his baggage on the other side of the world. Things couldn't be worse. Then he and Margaret throw caution and their pilchard sandwiches to the wind and hold a house-warming party in their new home.

"We Have Put Her Living in the Tomb"

What with decorating their new house and tortoise-sitting for Margaret's god daughter, the Meldrews have certainly got their work cut out. And to top that, disaster's lurking in the garden amongst the grass cuttings...

Victor's furtively writing a masterpiece of a sitcom and Margaret's taking up acting, just how much bedlam can a foray into amateur dramatics cause-that is the question.

One Foot in the Grave: In Luton Airport No One Can Hear You Screa

Or find "One Foot in the Grave: In Luton Airport No One Can Hear You Screa" on VHS and DVD / BluRay at Amazon.