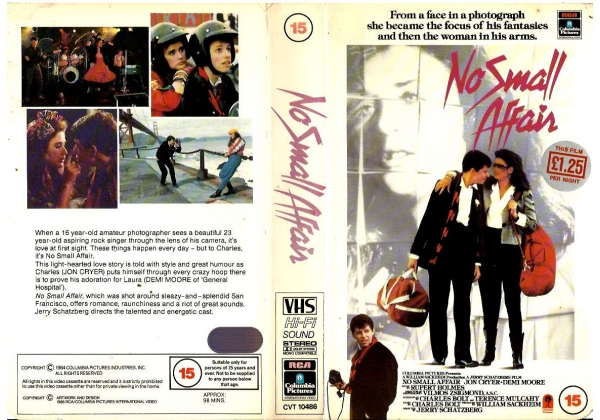 Sleeve Sypnosis:
From a face in a photograph she became the focus of his fantasies and then the woman in his arms.

When a 16 year-old amateur photographer sees a beautiful 23 year-old aspiring rock singer through the lens of his camera, it's love at first sight. These things happen every day - but to Charles, it's No Small Affair.

This light-hearted love story is told with style and great humour as Charles (JON CRYER) puts himself through every crazy hoop there is to prove his adoration for Laura (DEMI MOORE of 'General Hospital').

No Small Affair, which was shot around sleazy-and-splendid San Francisco, offers romance, raunchiness and riot of great sounds. Jerry Schatzberg directs the talented and energetic cast.

Or find "No Small Affair" on VHS and DVD / BluRay at Amazon.