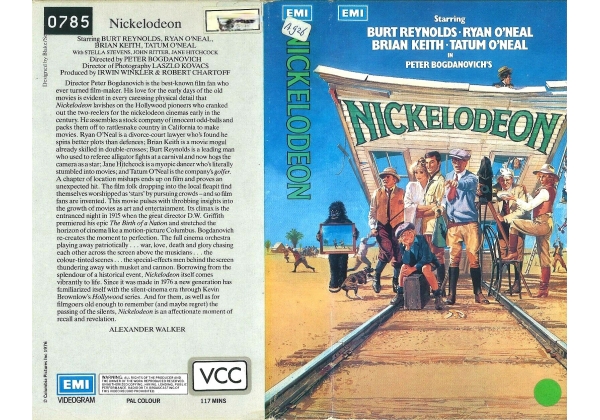 Sleeve Sypnosis:
Director Peter Bogdanovich is the best-known film fan who ever turned film-maker. His love for the early days of the old movies is evident in every caressing detail that Nickelodeon lavishes on the Hollywood pioneers who cranked out the two-reelers for the nickelodeon cinemas early in the century. He assembles a stock company of innocent odd-balls and packs them off to rattlesnake country in California to make movies. Ryan O'Neal is a divorce-court lawyer who's found he spins better plots than defences; Brian Keith is a movie mogul already skilled in double-crosses; Burt Reynolds is a leading man who used to referee alligator fights at a carnival and now hogs the camera as a star; Jane Hitchcock is a myopic dancer who's literally stumbled into movies, and Tatum O'Neal is the company golfer. A chapter of location mishaps ends up on film and proves an unexpected hit. The film folk dropping into the local fleapit find themselves worshipped as 'stars' by pursuing crowds - and so film fans are invented. This movie pulses with throbbing insights into the growth of movies as art and entertainment. Its climax is the entranced night in 1915 when the great director D.W.Griffith premiered his epic The Birth of a Nation and stretched the horizon of cinema like a motion-picture Columbus. Bogdanovich re-creates the moment to perfection. The full cinema orchestra playing away patriotically... war, love, death and glory chasing each other across the screen above the musicians... the colour-tinted scenes... the special-effects men behind the screen thundering away with musket and cannon. Borrowing from the splendour of a historical event, Nickelodeon itself comes vibrantly into life. Since it was made in 1976 a new generation has familiarized itself with the silent-cinema era through Kevin Brownlow's Hollywood series. And for them, as well as for filmgoers old enough to remember (and maybe regret) the passing of silents, Nickelodeon is an affectionate moment of recall and revelation.

Or find "Nickelodeon " on VHS and DVD / BluRay at Amazon.