Murder on the Orient Express
EMI 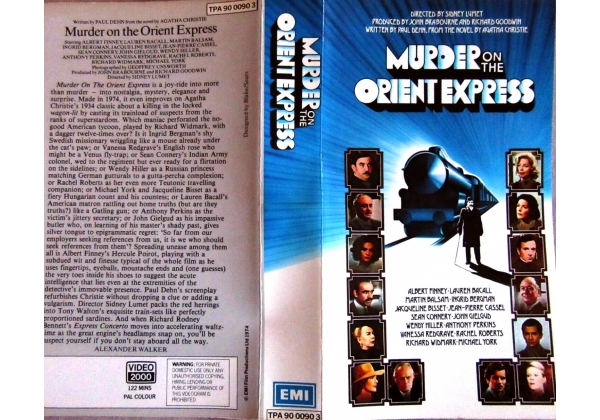 Sleeve Sypnosis:
Murder On The Orient Express is a joy-ride into more than murder - into nostalgia, mystery, elegance and surprise. Made in 1974, it even improves on Agatha Christie's 1934 classic about a killing in the locked wagon-lit by casting its trainload of suspects from the ranks of superstardom. Which maniac perforated the no-good American tycoon, played by Richard Widmark, with a dagger twelve-times over? Is it Ingrid Bergman's shy Swedish missionary wriggling like a mouse already under the cat's paw; or Vanessa Redgrave's English rose who might be a Venus fly-trap; or Sean Connery's Indian Army colonel, wed to the regiment but ever ready for a flirtation on the sidelines; or Wendy Hiller as a Russian princess matching German gutturals to a gutta-percha complexion; or Rachel Roberts as her even more Teutonic travelling companion; or Michael York and Jacqueline Bisset as a fiery Hungarian count and his countess; or Lauren Bacall's American matron rattling out home truths (but are they truths?) like a Gatling gun; or Anthony Perkins as the victim's jittery secretary; or John Gielgud as his impassive butler who, on learning of his master's shady past, gives silver tongue to epigrammatic regret: 'So far from our employers seeking references from us, it is we who should seek references from them'? Spreading unease among them all is Albert Finney's Hercule Poirot, playing with a subdued wit and finesse typical of the whole film as he uses fingertips, eyeballs, moustache ends and (one guesses) the very toes inside his shoes to suggest the acute intelligence that lies even at the extremities of the detective's immovable presence. Paul Dehn's screenplay refurbishes Christie without dropping a clue or adding a vulgarism. Director Sidney Lumet packs the red herrings into Tony Walton's exquisite train-sets like a perfectly proportioned sardines. And when Richard Rodney Nennett's Express Concerto moves into accelerating waltz-time as the great engine's headlamps snap on, you'll be suspect yourself if you don't stay aboard all the way.

Murder on the Orient Express

Or find "Murder on the Orient Express" on VHS and DVD / BluRay at Amazon.