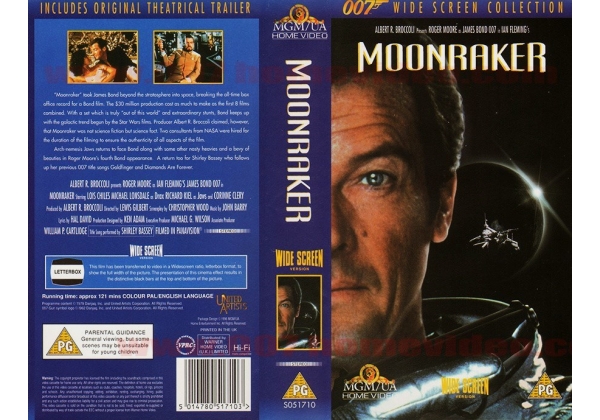 Sleeve Sypnosis:
Moonraker took James Bond beyond the stratosphere into space, breaking the all-time box office record for a Bond film.The $30 million production cost as much to make as the first 8 films combined. With a set which is truly "out of this world" and extraordinary stunts, Bond keeps up with the galactic trend begun by the Star Wars films. Producer Albert R. Broccoli claimed, however, that Moonraker was not science fiction but science fact. Two consultants from NASA were hired for the duration of the filming to ensure the authenticity of all aspects of the film.

Arch-nemesis Jaws returns to face Bond along with some other nasty heavies and a bevy of beauties in Roger Moore's fourth Bond appearance. A return too for Shirley Bassey who follows up her previous 007 title songs Goldfinger and Diamonds Are Forever.

Or find "Moonraker (widescreen)" on VHS and DVD / BluRay at Amazon.