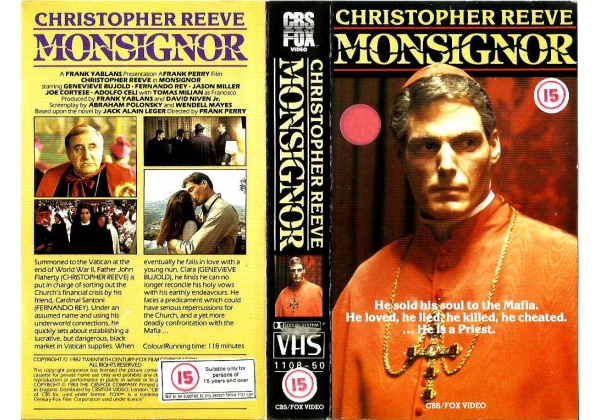 Sleeve Sypnosis:
Summoned to the Vatican at the end of World War II, Father John Flaherty (CHRISTOPHER REEVE) is put in charge of sorting out the Church's financial crisis by his friend, Cardinal Santoni (FERNANDO REY). Under an assumed name and using his underworld connections, he quickly sets about establishing a lucrative, but dangerous, black market in Vatican supplies. When eventually he falls in love with a young nun, Clara (GENEVIEVE BUJOLD), he finds he can no longer reconcile his holy vows with his earthly endeavours. He faces a predicament which could have serious repercussions for the Church, and a yet more deadly confrontation with the Mafia...

Or find "Monsignor" on VHS and DVD / BluRay at Amazon.