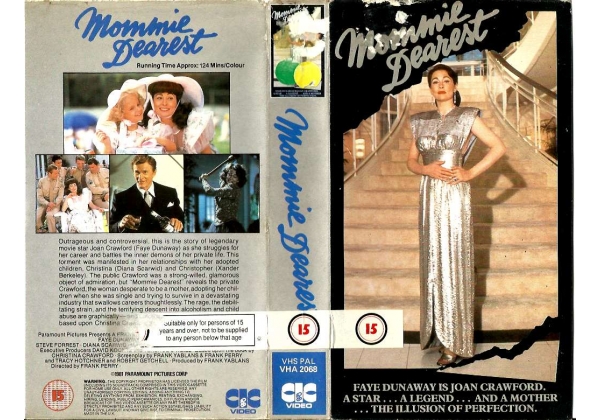 Sleeve Sypnosis:
Outrageous and controversial, this is the story of the legendary movie star Joan Crawford (Faye Dunaway) as she struggles for her career and battles the inner demons of her private life. This torment was manifested in her relationships with her adopted children, Christina (Diana Scarwid) and Christopher (Xander Berkeley). The public Crawford was strong-willed, galmourous object of admiration, but "Mommie Dearest" reveals the private Crawford, the woman desperate to be a mother, adopting her children when she was single and trying to survive in a devestating industry that swallows careers thoughtlessly.

The rage, the debillitating strain, and the terrifying descent into alcoholism and child abuse are graphically

Or find "Mommie Dearest" on VHS and DVD / BluRay at Amazon.