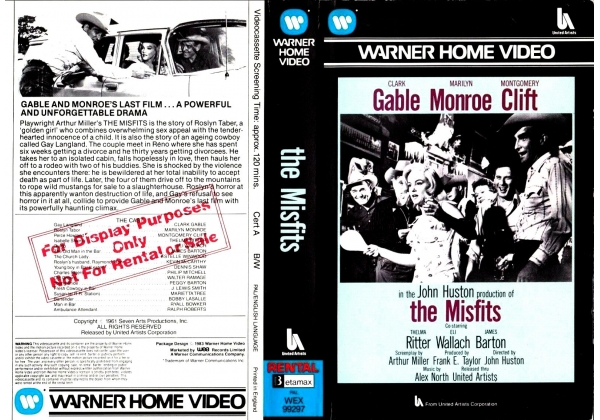 Playwright Arthur Miller's THE MISFITS is the story of Roslyn Taber, a 'golden girl' who combines overwhelming sex appeal with the tender-hearted innocence of a child. It is also the story of an ageing cowboy called Gay Langland. The couple meet in Reno where she has spent six weeks getting a divorce and he thirty years getting divorcees. He takes her to an isolated cabin, falls hopelessly in love, then hauls her off to a rodeo with his two buddies. She is shocked by the violence she encounters there: he is bewildered at her total inability to accept death as part of life.

Later, the four of them drive off to the mountains to rope wild mustangs for sale to a slaughterhouse. Roslyn 's horror at this apparently wanton destruction of life, and Gay's refusal to see the horror in it all, collide to provide Gable and Monroe's last film with its powerfully haunting climax.

Or find "Misfits, The" on VHS and DVD / BluRay at Amazon.