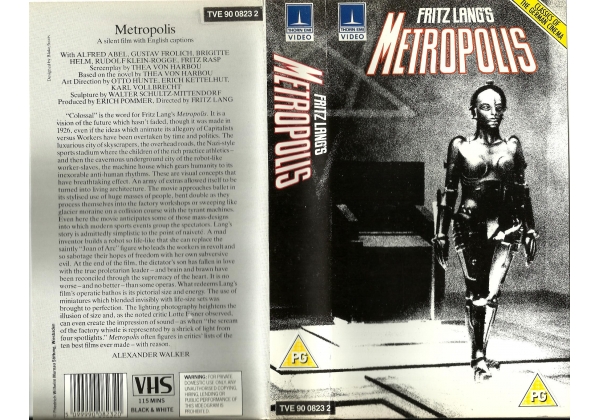 Sleeve Sypnosis:
"Colossal" is the word for Fritz Lang's Metropolis. It is a vision of the future which isn't faded, though it was made in 1926, even if the ideas which animate its allegory of Capitalists versus Workers have been overtaken by time and politics. The luxurious city of skyscrapers, the overhead roads, the Nazi-style sports stadium where the children of the rich practice athletics - and then the cavernous underground city of the robot-like worker-slaves, the machine house which gears humanity to its inexorable anti-human rhythms. These are visual concepts that have breathtaking effect. An army of extras allowed itself to be turned into living architecture. The movie approaches ballet in its stylised use of huge masses of people, bent double as they process themselves into the factory workshops or sweeping like glacier moraine on a collision course with the tyrant machines. Even here the movie anticipates some of those mass-designs into which modern sports events group the spectators. Lang's story is admittedly simplistic to the point of naivete. A mad inventor builds a robot so life-like that she can replace the saintly "Joan of Arc" figure who leads the workers in revolt and so sabotage their hopes of freedom with her own subversive evil. At the end of the film, the dictator's son has fallen in love with the true proletarian leader - and brain and brawn have been reconciled through the supremacy of the heart. It is no worse - and no better - than some operas. What redeems Lang's film's operatic bathos is its pictorial size and energy. The use of miniatures which blended invisibly with life-size sets was brought to perfection. The lighting photography heightens the illusion of size and, as the noted critic Lotte Eisner observed, can even create the impression of sound - as when "the scream of the factory whistle is represented by a shriek of light from the four spotlight." Metropolis often figures in critics' lists of the ten best films ever made - with reason.