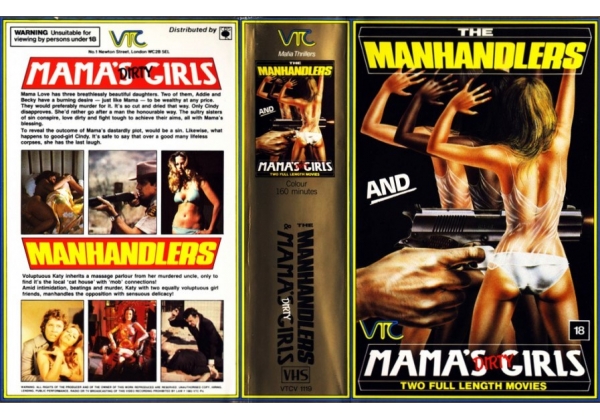 Sleeve Sypnosis:
The Manhandlers
Voluptuous Katy inherits a massage parlour from her murdered uncle, only to find it's the local 'cat house' with 'mob' connections!
Amid intimidation, beatings and murder, Katy with two equally voluptuous girl friends, manhandles the opposition with sensuous delicacy!

Mama Love has three breathlessly beautiful daughters. Two of them, Addie and Becky have a burning desire - just like Mama - to be wealthy at any price. They would preferably murder for it. It's so cut and dried that way. Only Cindy disapproves. She'd rather go after a man the honourable way. The sultry sisters of sin conspire, love dirty and fight tough to achieve their aims, all with Mama's blessing.
To reveal the outcome of Mama's dastardly plot, would be a sin. Likewise, what happens to good-girl Cindy. It's safe to say that over a good many lifeless corpses, she has the last laugh.

Or find "Manhandler's, The/Mama's Dirty Girls" on VHS and DVD / BluRay at Amazon.