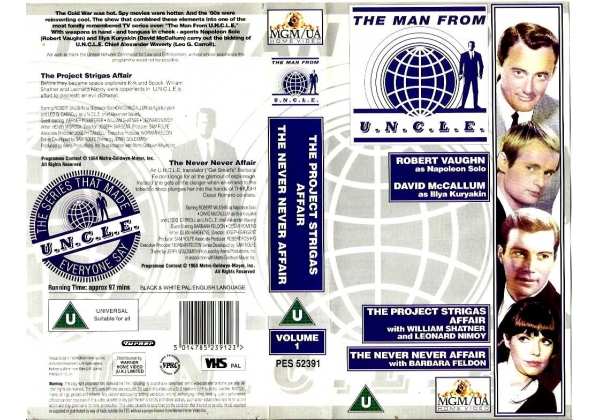 Sleeve Sypnosis:
The Cold War was hot. Spy movies were hotter. And the 60's were reinventing cool. The show that combined these elements into one of the most fondly remembered TV series ever: "The Man From U.N.C.L.E.". With weapons in hand - and tongues in cheek - agents Napoleon Solo (Robert Vaughn) and IIIya Kruyakin (David McCallum) carry out the bidding of U.N.C.L.E. Chief Alexander Waverly (Leo G. Carroll).

We wish to thank the United Command for Law Enforcement, without who's assistance this programme would not be possible.

Before they became space explorers Kirk and Spock, William Shatner and Leonard Nimoy were opponents in U.N.C.L.E's effort to discredit an evil diplomat.

An U.N.C.L.E translator ("Get Smarts" Barbara Feldon) longs for all the glamour of espionage. Instead she gets all the danger when an errand to the tobacco shop plunges her into the hands of THRUSH! Cesar Romero stars.

Man From UNCLE: The Vol. 1 - The - The Project Strigas Affair/The Never Never Aff

Or find "Man From UNCLE: The Vol. 1 - The - The Project Strigas Affair/The Never Never Aff" on VHS and DVD / BluRay at Amazon.