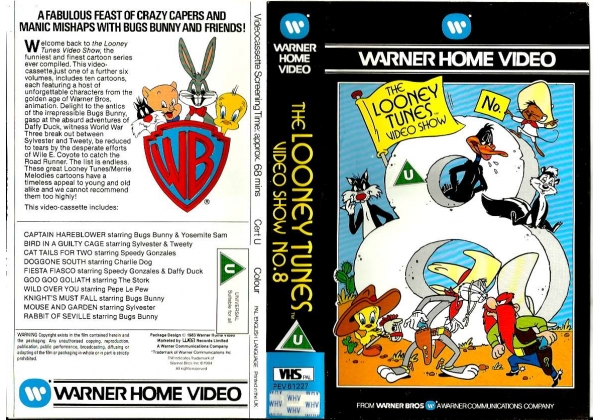 Sleeve Sypnosis:
A FABULOUS FEAST OF CRAZY CAPERS AND MISHAPS WITH BUGS BUNNY AND FRIENDS!

Welcome back to he Looney Tunes Video Show, the funniest and finest cartoon series ever compiled. This video cassette, just one of a further six volumes, includes ten cartoons, each featuring a host of unforgettable characters from the golden age of Warner Bros. animation. Delight to the antics of irresponsible Bugs Bunny, gasp at the absurd adventures of Daffy Duck, witness World War Three break out between Slyvester and Tweety, be reduced to tears by the desperate efforts of Wile E. Coyote to catch the Road Runner. The list is endless.

These great Looney Tunes/Merrie Melodies cartoons have a timeless appeal to young and old alike and we cannot recommend them too highly!

Looney Tunes Video Show No. 8, The

Or find "Looney Tunes Video Show No. 8, The" on VHS and DVD / BluRay at Amazon.