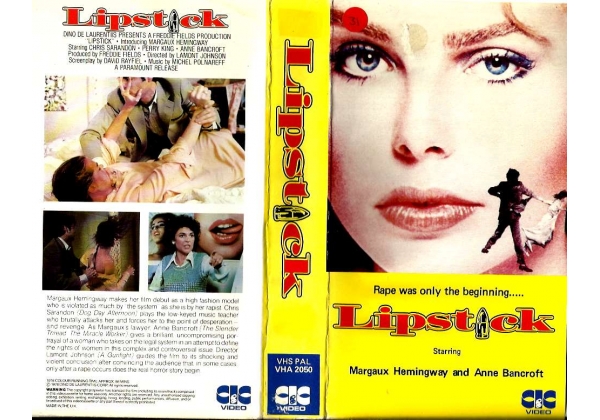 Sleeve Sypnosis:
Rape was only the beginning....

Margaux Hemingway makes her film debut as a high fashion model who is violated as much by the system as she is by her rapist. Chris Sarandon (Dog Day Afternoon) plays the low-keyed music teacher who brutally attacks her and forces her to the point of desperation- and revenge. As Margaux's lawyer, Anne Bancroft (The Slender Thread, The Miracle Worker) gives a brillant, uncompromising portrayal of a woman who takes on the legal system in an attempt to define the rights of the woman in this complex and controversial issue. Director Lamont Johnson (A Gunfight) guides the film to its shocking and violent conclusion after convincing the audience that, in some cases, only after rape occurs does the real horror story begin.

Or find "Lipstick" on VHS and DVD / BluRay at Amazon.