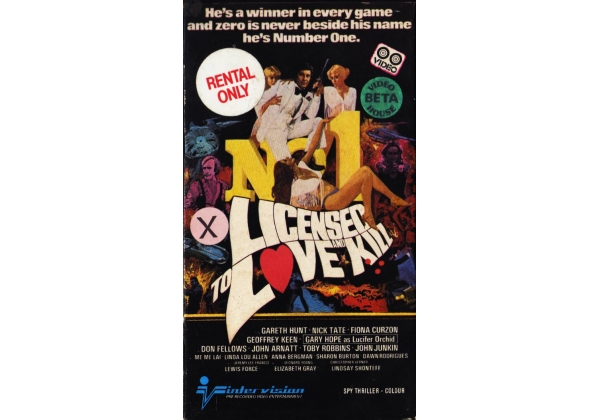 Sleeve Sypnosis:
Charles Bind, the 'Number One' agent of The British Intelligence Service, is sent to America to find a missing diplomat. Lord Dangerfield. His daughter, Carlotta Muff Dangerfield (known as 'Lotta Muff') and Senator Lucifer Orchid, an old friend of his lordship, are also looking for him. They are unaware that Senator Orchid plans to kidnap Lotta and blackmail her into forcing Lord Dangerfield to kill the President of the United States. To ensure success of his plans, Orchid hires a psychopathic mercenary, Jensen Fury, to kill Number One. He also engages a Mad Plastic Surgeon to make a duplicate Number One. Back in London, Number One encounters a beautiful woman who is really a deadly killer. With Jensen Fury, and a legion of exploding people still hot on his trail, Number One survives with the aid of K Department's fantastic gadgets. With Lotta held captive, Lord Dangerfields plan to kill the President is thwarted when Number One shoots the Mad Plastic Surgeon's duplicate Vice President. Number One follows Lotta and the real Vice President to a remote island in the Atlantic where they are held captive by Senator Orchid who plans to drown them. In a death-defying climax, Number One's car flies over the steel gates of Orchid's island mansion to run the terrifying gauntlet through a field of howitzers before reaching the airplane to rescue Lotta and the Vice President. Senator Lucifer Orchid meets a fitting end, burning himself to death. Number One despatches Jensen Fury into the ocean—and the film ends with a kiss.

Or find "Licensed to Love and Kill" on VHS and DVD / BluRay at Amazon.