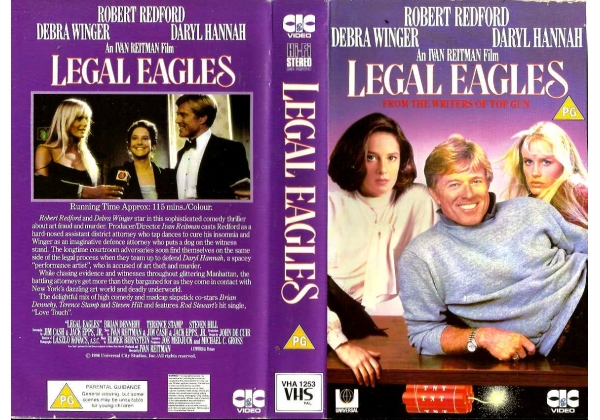 Sleeve Sypnosis:
Robert Redford and Debra Winger star in this sophisticated comedy thriller about art-fraud and murder. Producer/Director Ivan Reitman casts Robert Redford as a hard-nosed assistant district attorney who tap dances to cure his insomnia and Winger as an imgainative defence attorney who puts a dog on the witness stand. The longtime court adversaries soon find themselves on the same side of the legal process when they team up to defend Daryl Hannah, a spacey "performance artist", who is accused of art theft and murder.

While chasing evidence and witnesses throughout glittering Manhattan, the battling attorneys get more than they bargined for as they come into contact with New York's dazzling art world and deadly underworld. The delightful mix of high comedy and madcap slapstick co-stars Brian Dennehy,Terence Samp and Steven Hill and features Rod Stewart's hit single, "Love Touch".

Or find "Legal Eagles" on VHS and DVD / BluRay at Amazon.