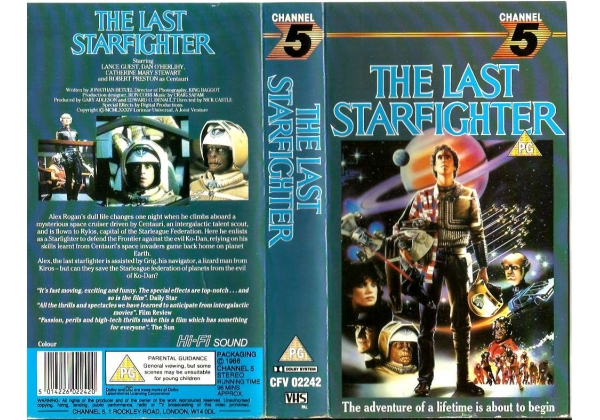 Sleeve Sypnosis:
The adventure of a lifetime is about to begin

Alex Rogan's dull life changes one night when he climbs aboard a mysterious space cruiser driven by Centauri, an intergalactic talent scout, and is flown to Rylos, capital of the Starleague Federation. Here he enlists as a Starfighter to defend the Frontier against the evil Ko-Dan, relying on his skills learnt from Centauri's space invaders game back home on planet Earth.

Alex, the last starfighter is assisted by Grig, his navigator, a lizard man from Kiros - but can they save the Starleague federation of planets from the evil of Ko-Dan?

"It's fast moving, exciting and funny. The special effects are top-notch. . .and so is the film". Daily Star

"All the thrills and spectacales we have learned to anticipate from the intergalactic movies." Film Review

"Passion, perils and high-tech thrills make this a film which has something for everyone." The Sun

Or find "Last Starfighter, The" on VHS and DVD / BluRay at Amazon.