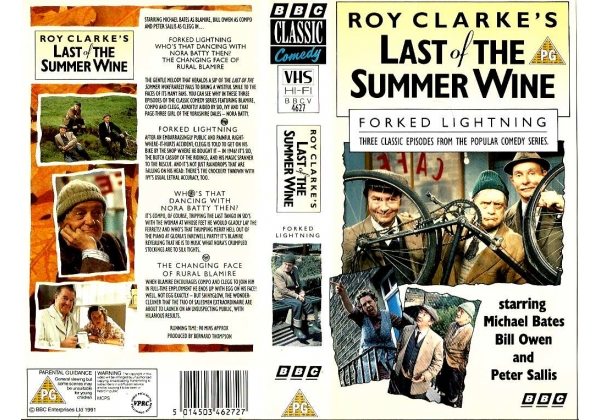 Sleeve Sypnosis:
The gentle melody that heralds a sip of The Last of the Summer Wine rarely fails to bring a wistful smile to the face of its many fans. You can see why in these three episodes of the classic comedy series featuring Blamire, Compo and Clegg, adroitly aided by Sid, Ivy and that page-three girl of the Yorkshire Dales - Nora Batty.

After an embarrassingly public and painful right-where-it-hurts accident, Clegg is told to get on his bike by the shop where he bought it-in 1946! It's Sid, the Butch Cassidy of the Ridings, and his magic spanner to the rescue. And it's not just raindrops that are falling on his head: there's the crockery thrown with Ivy's usual lethal accuracy, too.

WHO'S THAT DANCING WITH NORA BATTY THEN?

It's Compo, of course, tripping the last tango in Sid's with the woman at whose feet he would gladly lay the ferrets! And whos that thumping merry hell out of the piano at Gloria's farewell party? It's Blamire revealing that he is to music what Nora's crumpled stockings are to silk tights.

THE CHANGING FACE OF RURAL BLAMIRE

When Blamire encourages Compo and Clegg to join him in full - time employment he ends up with egg on his face! Well, not egg exactly - but shinyglow, the window-cleaner that the trio of salesmen extraordinaire are about to launch on an unsuspecting public, with hilarious results.

Or find "Last of the Summer Wine: Forked Lightning" on VHS and DVD / BluRay at Amazon.