Last of the Summer Wine: Deep in the Heart of Yorkshire
BBC Video 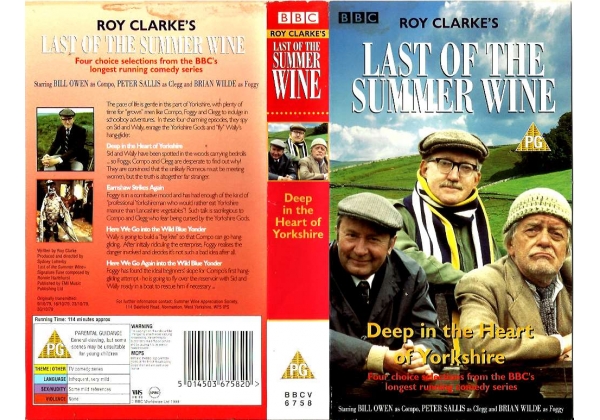 Sleeve Sypnosis:
The pace of life is gentle in this part of Yorkshire, with plenty of time for "grown" men like Compo, Foggy and Clegg to indulge in schoolboy adventures. In these four charming episodes, they spy on Sid and Wally, enrage the Yorkshire Gods and "fly Wally's hang-glider.

Deep in the Heart of Yorkshire

Sid and Wally have been spotted in the woods carrying bedrolls... so Foggy, Compo and Clegg are desperate to find out why! They are convinced that the unlikely Romeos must be meeting women, but the truth is altogether stranger.

Foggy is in a combative mood and has had enough of the kind of "professional Yorkshiremen who would rather eat Yorkshire manure then Lancashire vegetables"! Such talk is sacrilegous to Compo and Clegg who fear being cursed by the Yorkshire Gods.

Here We Go into the Wild Blue Yonder

Wally is going to build a "big kite" so that Compo can go hang-gliding. After intially ridiculing the enterprise, Foggy realises the danger involved and decides it's not such a bad idea after all.

Here We Go Again into the Wild Blue Yonder

Foggy has found the ideal beginners' slope for Compo's first hang-gliding attempt-he is going to fly over the resrevoir with Sid and Wally in a boat to rescue him if necessary...

Last of the Summer Wine: Deep in the Heart of Yorkshire

Or find "Last of the Summer Wine: Deep in the Heart of Yorkshire" on VHS and DVD / BluRay at Amazon.