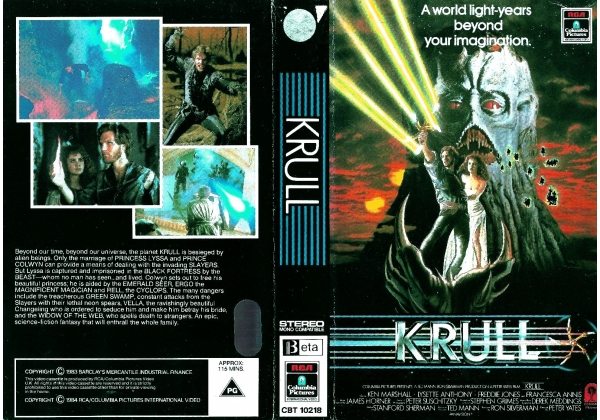 Sleeve Sypnosis:
Beyond our time, beyond our universe, the planet KRULL is besieged by alien beings. Only the marriage of PRINCESS LYSSA and PRINCE COLWYN can provide a means of dealing with the invading SLAYERS. But Lyssa is captured and imprisoned in the BLACK FORTRESS by the BEAST - whom no man has seen... and lived. Colwyn sets out to free his beautiful princess, he is aided by the EMERALD SEER ERGO the MAGNIFICENT MAGICIAN and RELL the CYCLOPS. The many dangers include the treacherous GREEN SWAMP, constant attacks from the Slayers with their lethal neon spears. VELLA the ravishingly beautiful Changeling who is ordered to seduce him and make him betray his bride, and the WIDOW OF THE WEB, who spells death to strangers. An epic, science-fiction fantasy that will enthrall the whole family.