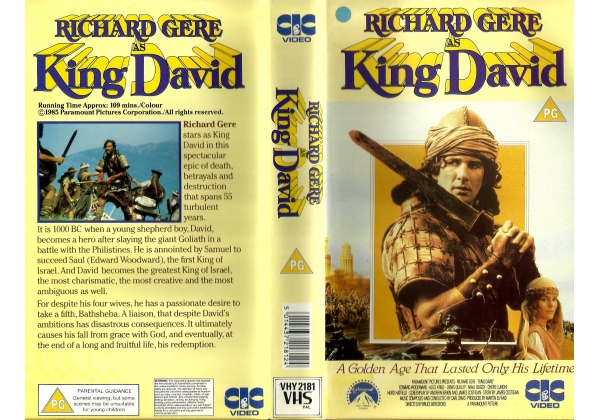 Sleeve Sypnosis:
Richard Gere stars as King David in this spectacular epic of death, betrayals, and destruction that spans 55 turbulent years. It is 1000 BC when a young shepherd boy, David, becomes a hero after slaying the giant Goliath in a battle with the Philistines. He is annointed by Samuel to succeed Saul (Edward Woodward), the first King of Israel. And David becomes the greatest King of Israel, the most charismatic, the most ambiguous as well.

For despite his four wives, he has a passionate desire to take a fifth. Bathsheba. A liaison, that despite David's ambitions has a disastrous consequences. It ultimately causes his fall from the grace of God, and evetually, at the end of a long and fruitful life, his redemption.

Or find "King David" on VHS and DVD / BluRay at Amazon.