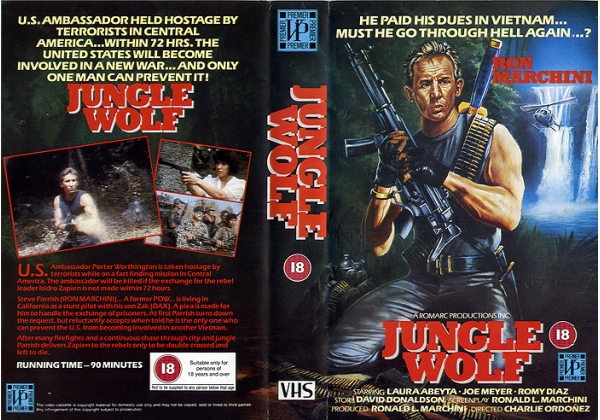 Sleeve Sypnosis:
He paid his dues in Vietnam...
Must he go through hell again...?

U.S. Ambassador held hostage by terrorists in Central America ...within 72hrs. the United States will become involved in a new war ...and only one man can prevent it!

U.S. Ambassador Porter Worthington is taken hostage by terrorists while on a fact finding mission in Central America. The ambassador will be killed if the exchange for the rebel leader Isidro Zapien is not made within 72 hours.

Steve Parrish (RON MARCHINI)... A former POW... is living in California as a stunt pilot with his son Zak (DAX). A plea is made for him to handle the exchange of prisoners. At firs Parrish turns down the request, but reluctantly accepts when told he is the only one who can prevent the U.S. from becoming involved in another Vietnam.

After many firefights and continuous chase through city and jungle Parrish delivers Zapien to the rebels only to be double crossed and left to die.

Or find "Jungle Wolf" on VHS and DVD / BluRay at Amazon.