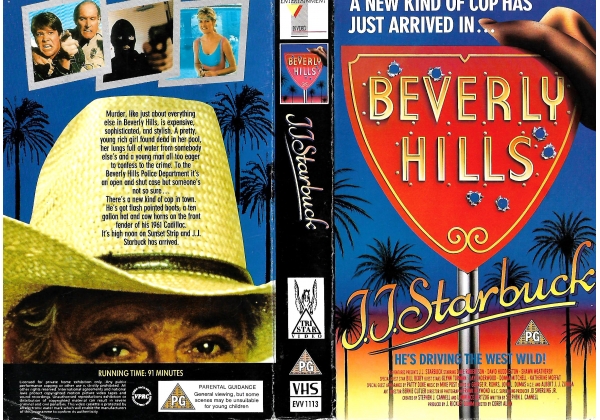 Sleeve Sypnosis:
A NEW KIND OF COP HAS JUST ARRIVED IN....

Murder, like just about everything else in Beverly Hills, is expensive, sophisticated, and stylish. A pretty, young rich girl found dead in her pool, her lungs full of water from somebody else's and a young man all too eager to confess to the crime. To the Beverly Hills Police Department it's an open and shut case but someone's not so sure....

There's a new kind of cop in town. He's got flash pointed boots, a ten gallon hat and cow horns on the front fender of his 1961 Cadilac. It's high noon on Sunset Strip and J.J. Starbuck has arrived.

Entertainment in Video
Cat No:
EVV 1113
Distributor
* N/A or Unknown

Or find "J.J. Starbuck" on VHS and DVD / BluRay at Amazon.