Jack and the Beanstalk
Intervision 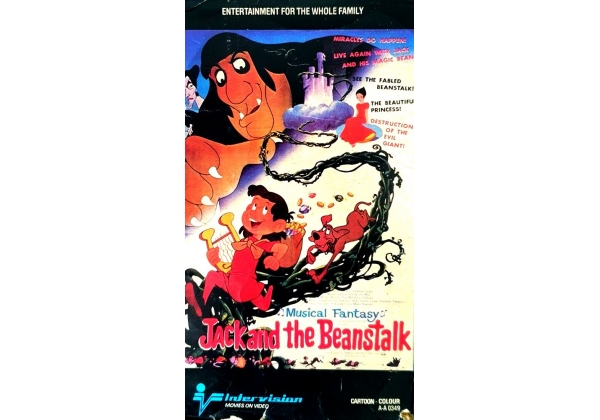 Sleeve Sypnosis:
MIRACLES DO HAPPEN! LIVE AGAIN WITH JACK AND HIS MAGIC BEANS! SEE THE FABLED BEANSTALK! DESTRUCTION OF THE EVIL GIANT!
This wonderful old fairy tale by the Brothers Grimm has been adapted by some of Japan's most imaginative cartoon artists to bring to screen life a dream which transports us on a cloud of music to the enchantment of the story book. Jack's magical beanstalk is the highway to a world where miracles are the order of the day in the dream fantasy realm of our imagination. It's great to a have a dream, once in a while, which lifts us far away from our drab, routine workaday surroundings to a land where good still invariably triumphs over evil. Through the modern miracle of film animation, we meet a truly fantastic cast of pen-and-ink characters given flesh and blood. First of all, there's Jack who trades an old cow that has stopped giving milk for a handful of beans; poor Princess Margaret, unable to break the spell which holds her in the power of the wicked sorceress, Madame Noir, who tries to hypnotise the Princess into marrying her repulsive son, Prince Tulip. And last, but not least, there's Grossby, Jack's faithful hound dog at his master's side through thick and thin, ever ready to help Jack wreak vengeance on all evil-doers.

Jack and the Beanstalk

Or find "Jack and the Beanstalk" on VHS and DVD / BluRay at Amazon.